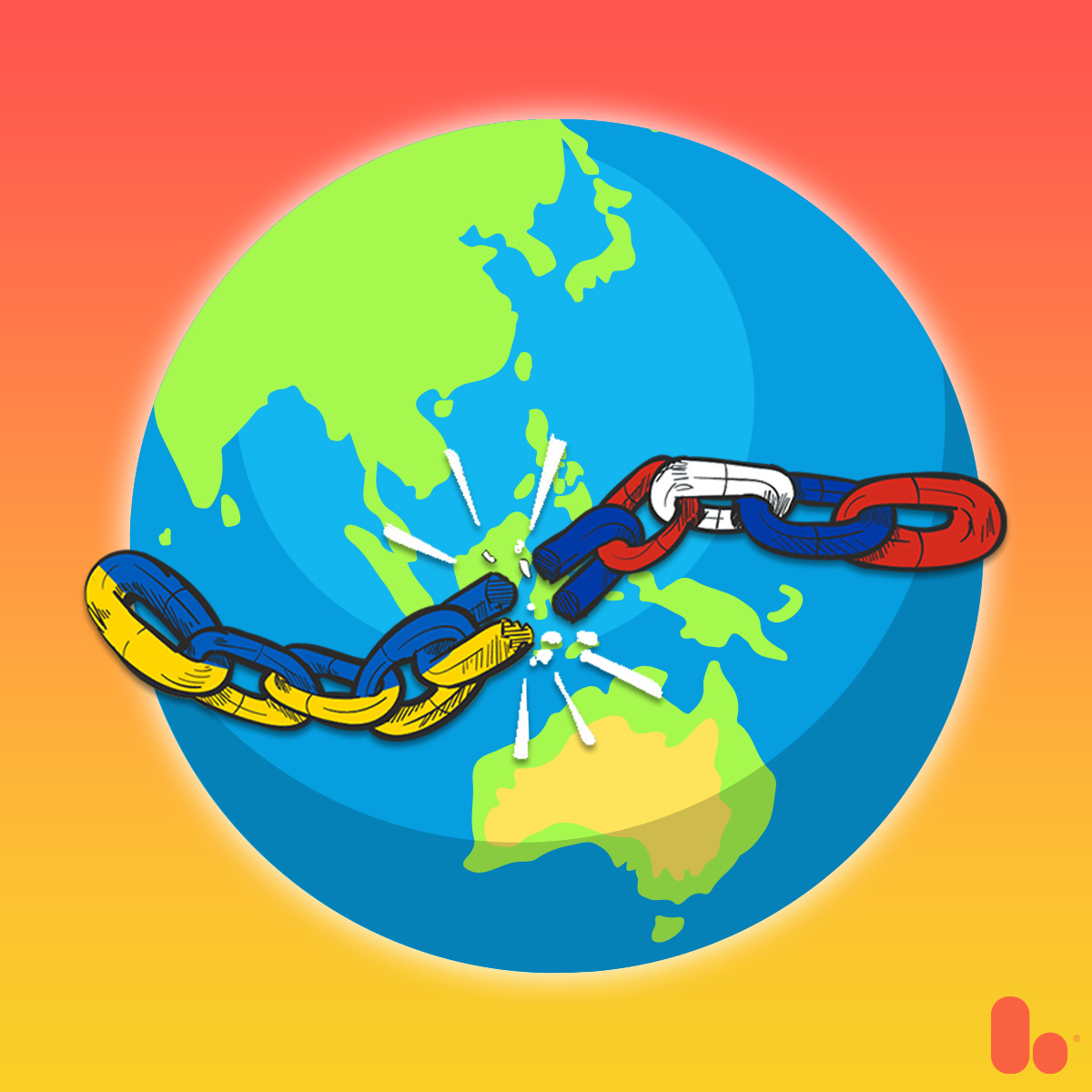 More than a thousand lives were lost and millions more displaced amidst the Russia-Ukraine conflict—and these numbers go higher by the day. The most tragic outcomes of the Russian-Ukraine war are the lives lost, families torn apart and livelihoods disrupted. But whilst the conflict has the most direct consequences on the people of Russia and Ukraine, the ripple effect that spans across continents is crystal clear. In this article, we highlight the economic repercussions of the ongoing conflict. Let’s talk about the Russia-Ukraine War and the financial world.

The financial world is closely tied to any international (and even civil) conflict; amidst the Russia-Ukraine war, there seems to be more emphasis on the linkage. Even more so because the global economy is still recovering from the blowback of the present pandemic. Let’s dive deeper. During the first month of the Russia-Ukraine war, what significant changes in the financial world have we seen?

Russia-Ukraine War and the Financial World: The immediate results

Most jurisdictions, particularly the European Union and the G7 countries, have taken initiatives to prevent Russia from acting any more aggressively during this conflict by imposing various international sanctions; the major ones being:

There are sanction packages also apply to Belarus, which has since announced its public support for Russia. According to the European Union, the sanctions it has imposed are a way to ‘cripple the Kremlin’s ability to finance the war’ and ‘impose economic and political costs for Russia’s political elite who are responsible for the invasion’. Both the US and the EU are expected to release more sanctions on Russia.

Reuters published a list of global sanctions against the country.

To address these global sanctions, the Russian government has taken countermeasures. On 28 February 2022, Putin issued a special decree: ‘On Special Economic Measures in connection with the Unfriendly Actions of the United States of America and Other Foreign Countries’. This decree mandates, amongst others:

Dutch Prime Minister Mark Rutte has repeatedly expressed that Europe is heavily dependent on Russia in terms of energy, so cutting oil and gas supply from the country will have ‘enormous ramifications’. In a separate press conference, Rutte said the EU has ‘vulnerabilities in terms of [its] dependency on Russian oil and gas’, calling this ‘the uncomfortable truth’. Similarly, EU Commission President Ursula von der Leyen said in an official statement: ‘We must become independent from Russian oil, coal and gas. We simply cannot rely on a supplier who explicitly threatens us.’

It’s a different story for the US, which leads imposing sanctions against Russia, as the country does not heavily rely on Russian gas; so much so that on the second week of the Ukraine crisis, the White House banned Russian oil and gas imports to the country.

So, how, exactly, does the Russia-Ukraine war affect the oil prices?

Due to the supply disruption of oil and gas—in the US, particularly—oil prices have gone up (which was already the direction even before the crisis broke out). In fact, this year, Brent crude price has spiked to USD 130 per barrel. In comparison, it was only USD 70 pb in 2021. On average, a gallon of gas is worth $4.17 in the US this year, much higher than last year’s $2.66; and the price is anticipated to go even higher as summer approaches.

Apart from the US pulling out of the Russian oil market and the EU considering following suit, big names like Shell and BP have stopped buying oil from Russia.

Still, Russia has found a way to dispose of its crude oil and gas supply: by selling it at discounted prices. India is a big target market. Reportedly, Russia offers its oil to the Asian country at pre-war prices plus a bonus of a $35 discount per barrel. The tradeoff, though, is that India must bypass the SWIFT system to buy cheap Russian oil. Ruble-rupee transfers will be done via the SPFS in exchange for the Urals. Experts warn there may be a flipside for countries outrightly transacting with sanctioned Russia. Others argue, however, that India buying oil from Russia is no different when Russian oil dependent-EU member states are doing the same.

Continuous gas price shocks force the public to spend more on energy than any other commodities due to its feedstock nature. When oil prices move, it’s a domino effect, and clearly, there will be a significant impact on inflation and GDP.

The Russia-Ukraine war and the financial world are linked not only because of money and economic matters but the supply chain as well, which includes the production and delivery of key agricultural products and important minerals. Even the corporate exodus from Russia has an impending financial impact on a global scale. How does the tension affect the global supply chain? Let’s talk numbers:

The rising oil price will, of course, carry with it higher shipping costs. Some analysts say corporations, especially manufacturing companies, will likely consider producing goods domestically as the supply chain and oil price shock continue to impact the world. Recycling materials may also be seen as a stopgap solution to continue production.

Over the past years, ESG investing has been at the forefront of the sustainable investment movement, with emphasis on the environment movement. From a niche, ESG has become a corporate norm as the public and government bodies have started being critical of the environmental and social responsibilities of corporations. Then the Russia-Ukraine war happened.

The conflict has a severe impact on financial markets and basic commodities; what’s more, it has also changed the way corporations make business decisions: which side of the war are they on?

Relative to ESG, the recent developments have put the following questions front and centre:

Crypto under the spotlight

Lately, cryptocurrency has been making headlines. And when news of global financial sanctions versus Russia broke out, the digital asset has been thrust even further at the centre stage. Questions arose: does cryptocurrency have a role above its weight amidst the ongoing conflict?The clear answer is yes. Whether the role is favourable or not depends solely on which side of the coin you support.

In a previous article, we explained how cryptocurrency proved to be useful for both Russia and Ukraine.

More than a month into the war, what changed in the cryptocurrency game in a time of war?

With the key role that cryptocurrency played in the first days of the war (Russians using it to exchange their rubles; Ukraine using it to accept humanitarian and military donations), the world is gradually starting to make sense of how this ‘digital money’ and the process of peer-to-peer transactions are shaping international affairs.

Mid-March of this year, the Ukrainian government enacted a law that provides for the legal framework of cryptocurrency transactions within and from the country. This, after digital coin donations poured in rapidly in the first week of the crisis. Just last year, Ukraine President Volodymyr Zelenskyy vetoed a similar bill. Notably, El Salvador is the only country to fully accept cryptocurrency as legal tender. Is Ukraine’s action a step toward a global embrace of the virtual asset? The answer, like crypto, will remain volatile.

On the other hand, Russia’s use of crypto as a manoeuvring technique against sanctions may push the west—and the rest of the world, for that matter—to impose stricter regulations on the use of the virtual coin.

With geopolitical tensions unfolding in front of us—amidst a recession brought by the Covid-19 pandemic, no less—new information is available every minute, and along with it, crucial changes to the global marketplace. The conversation on the Russia-Ukraine war and the financial world—the shifts and spikes and the spiralling down—goes on; so, for now, the most important thing for governments and corporations to do is listen closely to and answer back carefully.

Bolder Group commits to its values of caring, connecting and challenging. As a global fund administration services provider, we deeply care about international affairs, not only because of business but more importantly because of humanitarian reasons. As we face dark days, we do our best to connect with our teammates, partners and clients, to keep them updated on how the recent events may affect them and our relationship with them. And as challenging as these times may be, it is up to us to face the challenge of taking bold steps to help. Our team members have taken initiatives to aid people affected by the crisis, and we hope to inspire more to break the barriers one kind act at a time.